Reader’s digest version: In short, “government” (AKA “the state”) is immoral because it requires the use of force against innocent people. The state violates the rights of its subjects by its very nature, forcing us to obey rules we never agreed to under the threat of kidnapping and imprisonment.

“Government” is an institution which claims to have ultimate, overriding authority within a geographical area. That is, the state believes itself to posses the exclusive right to aggression (violation of others’ personal or property rights) within a geographical territory. In other words, government is the idea that some people (agents of the state) may violate the existing rights of other people (normal folks like you and I).

“Law” is government decree, backed up by ever-escalating force.

So, how is government inherently immoral? Surely we need laws within human society right? To make our point, let us first lay a foundation of principles.

The concept of “natural law” is the simple idea that true human rights are inherent by virtue of human nature, and universally cognizable through human reason. Historically, natural law refers to the use of reason to analyze both social and personal human nature to deduce binding rules of moral behavior. (From https://en.wikipedia.org/wiki/Natural_law).

The basic natural rights of humans are self-ownership, life, liberty, and property. 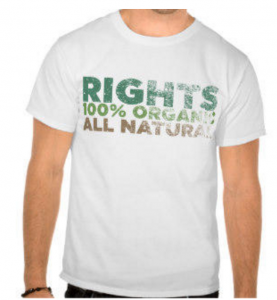 In other words, natural law is a reflection of common-sense moral concepts. Natural law is to human interaction as scientific law is to the physical world. When dropped, an apple does not fall towards the earth because Newton’s 2nd law is written on a piece of paper. Yet, Newton’s 2nd law is an accurate observation of the pre-existing laws of physics which cause the apple to drop.

Why is this important?

In the same way that an engineer must consistently use the scientific method if his or her design is to work properly, we need to consistently apply true and legitimate philosophical principles if we are interested in living in a society which functions, prospers, and makes sense.

F=ma is a physical law which applies universally, in all physical situations. The engineer can choose to ignore it, but he or she will never achieve success. Likewise, we can choose to ignore natural law. The consequence is that our society will not work, because our human interactions are at odds with our own internal, common-sense understanding of natural human rights.

All of the above is a fancy way of saying that people have the natural right to do whatever the fuck they want, as long as they don’t violate the rights of other people. You’re free to swing your fists around, as long as they don’t collide with my face. I cannot tell you how you can or can’t behave on your rightful property. I do me, you do you. Leave me alone, I’ll leave you alone. We are free to voluntarily interact with, trade, befriend, ignore, compliment, and high-five other people, as long as they consent. If I use force against you, you have the right to defend yourself and your property. All people have equal rights, and nobody may override these rights. Common sense.

If the above listed principles are true and universal, then government is morally illegitimate because it violates said principles. Specifically:

• Government laws require enforcement. If government laws are not natural laws, then force is being used against innocent people, violating liberty.
• Taxation, being theft, violates property rights
• If government has the right to initiate force and steal property, but the rest of us do not, and we are not allowed to defend ourselves or our property against government aggression, then this violates the concept of equal human rights.

Let’s elucidate these abstract principles with some straightforward examples.

Minimum wage law states that workers are not allowed to sell their labor under a certain arbitrary limit. If an (unskilled) worker is found to be selling their labor for cheaper than the minimum wage, then their employer will ultimately be kidnapped and caged, if they continue to disobey government commands. This law is clearly horseshit, because people have a right to trade with one another without begging permission from anyone else. (not to mention this law makes employing unskilled people virtually impossible). Yet, the state claims to have authority over this voluntary exchange.

Taxation requires that you pay fees to the government even if you never agreed to said fees. Sales tax, property tax, income tax, etc. are all simply shakedown fees, no different than a mugger’s demands to empty your wallet. If you don’t pay, you will eventually rot in jail. Why? Because the government said so.

Mandatory Health Insurance is a fancy way of saying “buy this or go to jail”. Last I checked, businesses don’t get to go door-to-door and force people to sign up for contracts at gunpoint. As a free human being, it is your natural right to buy or not buy whatever the hell you want, period. Yet, many countries force people to buy into socialized schemes against their will.

Medical/drug regulations state that even though you own your body, you’re not allowed to put certain things into your body because reasons. Yes, even if you’re a terminally ill patient who wants to try experimental medicine, you can’t. You’re not allowed to sell your blood or organs to people who desperately need them. You aren’t allowed to smoke a plant that helps you relax. 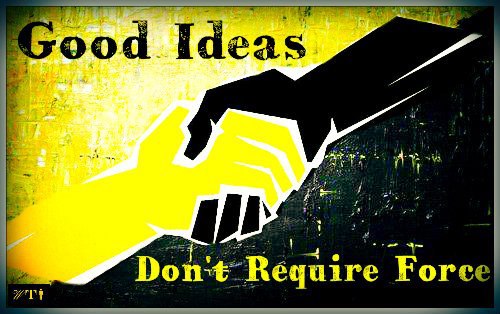 If you continually violate government law, you WILL eventually be abducted by agents of the state and held in prison for years. If you attempt to escape from prison, you will most likely be shot. By now, it should be clear that anything the government calls mandatory is a thinly-veiled threat of kidnapping, imprisonment, and eventual murder.

Government is the idea that certain people have the right to violate other peoples’ rights. Of course, this concept is contradictory to basic facts and therefore makes no sense.

Forcibly preventing or responding to actual crimes, such as theft, rape, murder, assault, etc. are examples of upholding natural law, and these are necessary and moral functions in society. Most governments attempt to enforce natural law, and the problem is not with these functions of government. The problem is that by definition, government goes far beyond protecting natural rights, and in doing so violates natural rights.

Delegating Authority to the State?

There are several popular arguments for the authority of the state. People often argue that the government derives legitimate authority from:
• The constitution
• Democracy/voting
• Other really weak reasons

One cannot delegate a right that he or she does not possess. If I do not have the right to rob, kidnap, or imprison you, writing “I have the right to rob, kidnap, and imprison you” does not make it so. The constitution is essentially that; A glorified piece of paper wherein people attempt to grant themselves rights. Rights can only be transferred voluntarily. If I ask you to watch my house for the weekend or to perform surgery on me, I have delegated rights to you that no other human possesses; Otherwise, nobody is allowed to enter my home (property rights) or cut me open (self-ownership) without my consent.

The founders of the United States recognized the obvious legitimacy and importance of natural law, and their vision of government was a minimalist state which more or less only upheld natural law. Hopefully though, it is now self-explanatory that it makes no sense to use the state to protect natural rights if the state is, in essence, a violation of natural rights. 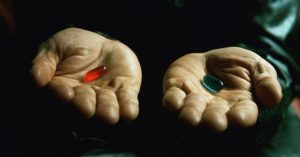 Do you want to see how far down the rabbit hole we can go?

As if the red horse pill of morality isn’t big enough for people to swallow, we’re also left with endless burning questions and concerns about a society without government:

• What about national defense?
• Won’t criminals run wild?
• Who will build the roads?
• No public safety nets?
• Monopolies will take over!
The short answer to all of these questions is that a free society can perform any service or solve any problem that the government can, (and many that the government can’t) except much better and at a lower cost. The proof for this is all around us, and it comes at no surprise that human interactions built on voluntaryism always outperform those built on coercion.

But, naturally, people have a difficult time imagining hypothetical situations, so there’s no harm trying to imagine how a free market would handle complicated social issues. This blog is an ever-expanding collection of how and why a free society is preferable to a state-run society, so if your own personal concern is not yet assuaged, drop a comment and we’ll address it promptly. 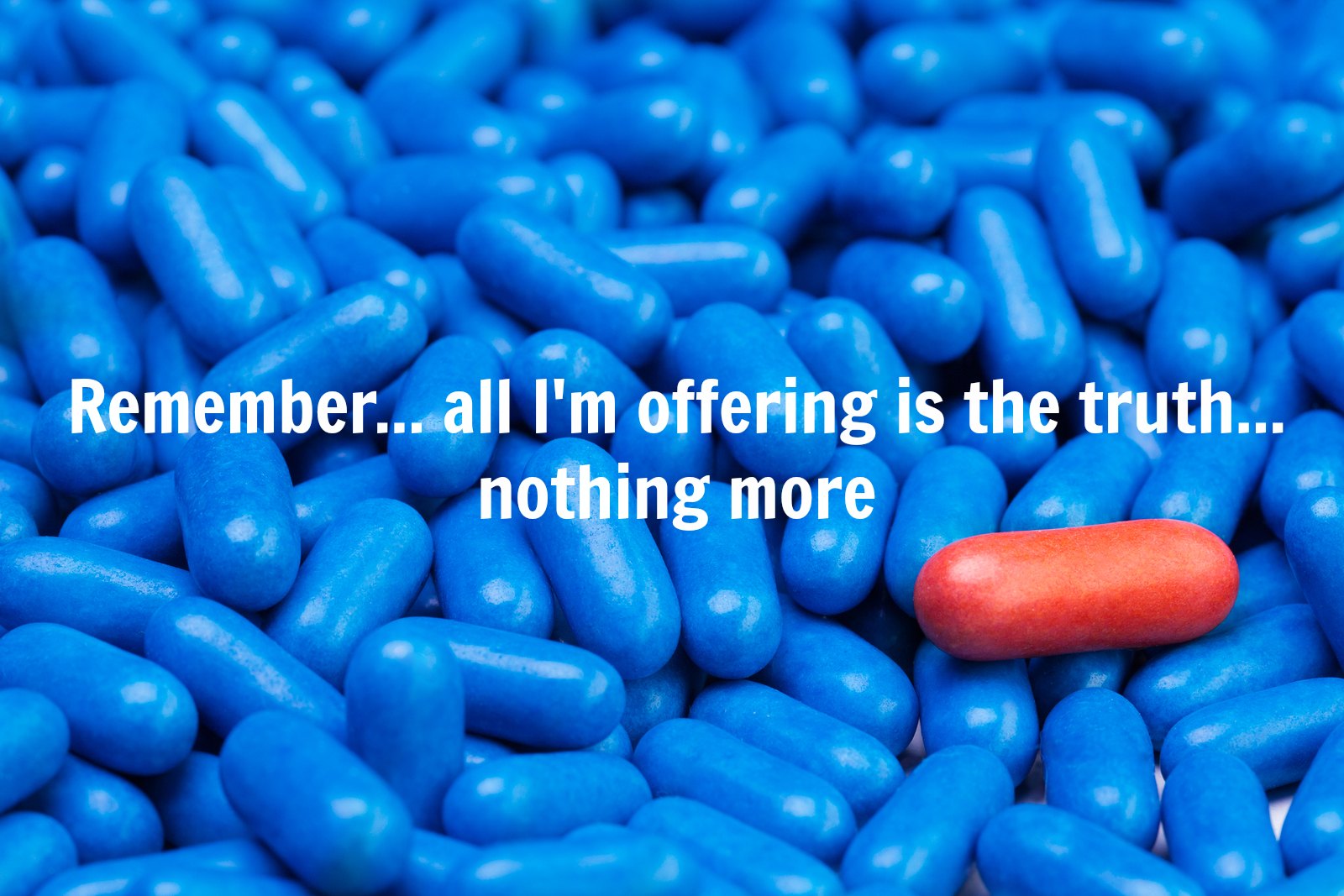