“Taxation is theft!” remains the ubiquitous battle cry of right-libertarians and voluntaryists the world over. If there’s one phrase that sums up the thrust of their movements, TIT is IT.

This question is easy to answer.

All we must do is determine whether or not taxation falls within the definition of theft. We would use the same method to find out whether a square is a rectangle, or whether an eagle is a bird. First, we define each action:

Theft: The taking of a person’s rightfully owned property without consent, with the intent to deprive said person of their property (This definition hinges on an acceptance of the validity of property rights).

Taxation: Mandatory payment (through money or other property) for government goods or services.

If taxation is mandatory, that means that it is collected regardless of the individual’s consent. Therefore, if an individual does not consent to a tax, it must be collected through theft or not at all.

A straightforward reading of dictionary definitions confirms this: 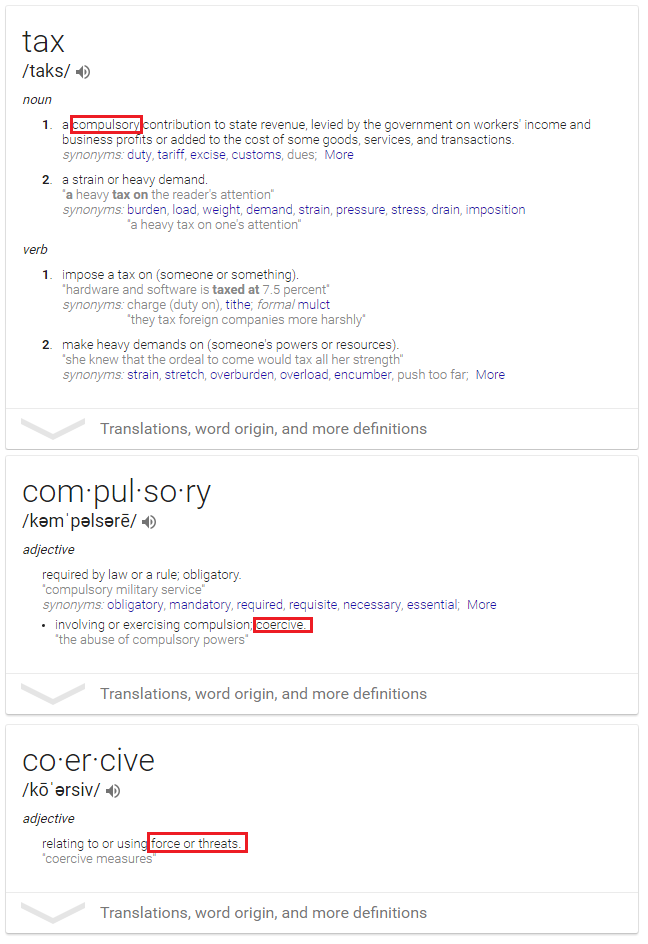 So, we can clearly see that taxation falls neatly and cleanly into the definition of theft/stealing (In fact, robbery is a more accurate definition of taxation, because taxation is backed with force or coercion).

1: Taxation is voluntary, because by living in a country, one implicitly agrees to taxation. This is because government has authority to tax, and you chose to stay within the confines of government authority (national borders).

This argument can be broken into several sub-sections:

According to the common-sense idea of property rights, property owners have authority to determine what actions are permitted (or prohibited) on their property. Land can be a form of property. Therefore, if someone owns land, they have the moral right to exclude other people from trespassing on or performing certain actions on their land. In short, the concept is “your house, your rules”. You wouldn’t walk into someone’s house and think you have the right to tell them what things they can and cannot do. Likewise, you would laugh at someone if they came in your house and told you that you’re not allowed to drink wine or watch movies. The same concept applies to land.

Building on this principle, it would make sense that if government owns land, then government can tax on its land. This would be essentially no different than an amusement park or golf club charging admission fees (and enforcing rules) to use its property. There’s just one small problem: Government does not own anything. One does not have the right to enforce arbitrary rules (in the form of taxes, laws, etc.) on land that one does not own. This topic is fully investigated here: Does government own land?

B: Government authority comes from democracy

Democracy is majority opinion and nothing more. Since when does opinion magically grant someone authority? If you lived on an island with 1,000 people and they all voted to have someone raped, would that mean the rape that occurred was not rape? The principle from this thought experiment is exactly the same regarding taxation being theft. The definition of theft does not depend on majority opinion- it already exists objectively.

A constitution is essentially a founding document which describes the basic structure and rules of an entity, be it a private company, club, or government. However, If no previous authority exists (such as that which comes from land ownership), a “constitution” means nothing. I cannot simply write on a piece of paper “I have the right to rob you” and magically obtain the right to rob you. The fact that some people called “the founding fathers” got together and all agreed to sign the U.S. consitution some ~200 years ago adds zero legitimacy to said document. In short, the constitution is a worthless piece of paper with no authority.

Now, let’s say I own a private company and want to document the rules and regulations of my company in my own constitution of sorts. Does this consitution grant me authority to create these rules? No, the fact that I own the company (and/or the building which my company operates in, and/or the land which the building rests on) is what grants me authority to create said rules. My “constitution” is merely a recording of these rules.

Writing things on paper does not grant legitimacy.

2: Taxation is not theft because we receive value from government services (even if we didn’t agree to them)

The definition of theft does not depend on a third party’s evaluation of value transfer that takes place in an involuntary exchange of property (theft). Why? Because the very nature of subjective value guarantees that any involuntary exchange will result in a win-lose transaction wherein the thief wins and the victim experiences a net loss.

Let’s illustrate this concept with a simple example. Say you need your house painted. Thankfully, a painter is walking the streets offering his or her services, at a price of course. In your own mind, you are willing to pay $5,000 to have your house painted. Some people would be willing to pay more, and some less. Many variables determine how much you value something, and these variables are different for every person. Your neighbor may be willing to pay $8,000 for a paint job because he is very busy, and he can earn back money faster than you can. You, on the other hand, may enjoy physical work slightly more, and wouldn’t mind painting your house if you cannot find someone who will for $5,000 or less.

In this situation, did you win? Obviously not. One could argue that you gained $5,000 worth of value in having your house painted. That would be all fine and well, except for the fact that you lost $6,000 in that transaction, not $5,000. From this example, one very important principle is revealed: Anytime you must force somebody to enter into a transaction against their will, you know for a FACT that you’re making them worse off, because if they believed that they would be better off from the transaction, you wouldn’t need to force them in the first place! Because value is subjective for each and every person, only the individual can determine what a good or service is worth to them at any moment in time. Therefore, ANY forced economic transaction necessarily results in some level of theft against the non-consenting party.

3: But you can avoid taxation by leaving or not working, therefore it’s voluntary

Not avoiding aggression does not imply consent to said aggression. A woman does not consent to being assaulted in a dark alleyway even if she’s walking around a dimly lit alleyway at 3:00 AM in a miniskirt. If a person has a right to his or her property (in the above example, the woman owns her body), then no other person has a right to said property. The mere fact that a person attempts to exercise their right to trade money with other humans (income tax, sales tax) or live on a particular plot of land (property tax) in no way implies consent to an illegitimate shakedown. If it did, then any common thug could walk up to your door and demand payment arbitrarily, claiming that you owe him money because he says so. After all, if you don’t like it, why don’t you just leave your house? Of course, the correct response would be that you own your house and as such do not owe the thug anything, period.

While this argument seems ridiculous (for good reason), die-hard statists have made it before. In an attempt to turn the concept of property against voluntaryists, some statists have claimed that because the government is the original creator of a currency, they therefore own said currency. Because citizens use government money “voluntarily”, they cannot complain when the government demands some or even all of it back. While this argument may hold water in a voluntary and legitimate institution such as Chuck E. Cheese’s, it falls apart everywhere else. Why?

The use of government currency is not voluntary, it is forced. This simple fact goes a long way to reveal the slavemaster role that the state plays. Yes, citizens will go to jail for using alternative forms of money in virtually all existing countries (see: The Liberty Dollar creator goes to prison). Clearly, kidnapping and caging someone for the non-crime of creating alternative money is a violation of the non-aggression principle and is thus a morally illegitimate action (see: government is inherently immoral).
When people are coerced into a situation, any decision they make as a direct result of said coercion cannot be said to be voluntary. As we intuitively know, people cannot be held responsible for decisions made under coercion. Thus, the claim that people owe government whatever it demands because they voluntarily chose to use government money falls apart completely when the “voluntary” condition dissolves. Clearly, people would NOT use government money if they had the choice. How do we know this? Well, the threat of kidnapping for using alternative currency should be a major hint.

So, even though government does create its own currency, the fact that it is literally forced onto people under threat of kidnapping invalidates the claim that use of government money is voluntary. As a result, the entire situation is completely invalid. The morally repugnant nature of this coercion should be obvious to all. Nobody has a right to dictate how other people behave or trade. Free people have the right to do WHATEVER they want, as long as they are not violating the rights of others. Therefore, you cannot force people to use a form of money as a basis for their lives and then later claim that you own all of the money, because their use of said forced money was only predicated on coercion to begin with. It would be no more valid for me to point a gun at you, demand your wallet, and then claim that I own your wallet because you voluntarily gave it to me.